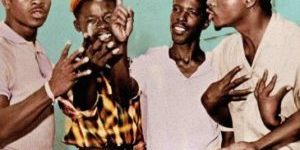 The world premiere of The Glamour Boyz Again kicks off the CaribbeanTales film festival.

By: Jason Anderson Special to the Star, Published on Thu Aug 28 2014

One film festival not enough for you?: You may wonder how there could possibly be room for another film festival at the same time as TIFF. Well, how about fourothers? The first two weeks of September see the arrival of a brave contingent whose members are eager to divert some attention away from the behemoth that is otherwise ready to swallow the city whole.

The pluckiest of this quartet (see below for more), the T.O. Indie Festival is a haven for micro-budget and no-budget moviemakers that eagerly positions itself as an scrappier alternative to TIFF much as Slamdance is to Sundance. Now in a new home in the Carlton Cinemas, the latest edition opens on Sept. 4 at 6 p.m. with Rearview, a thriller by Toronto’s Robert Gulassarian. The program continues to Sept. 13 with an array of features, docs and shorts by intrepid DIY types across Canada and the rest of the world. Standouts include Silent Ones (Sept. 10 at 9:15 p.m.), a Hungarian drama that originally debuted at last year’s Rotterdam festival, and Ku-On (Sept. 12 at 9:15 p.m.), a Japanese science-fiction thriller about the freaky genetic mutations awaiting our species 200 years from now.

Among the roster of shorts are Junction (part of the program on Sept. 5 at 7:45 p.m.), whose cast includes Nick Mancuso, and Tager (Sept. 8 at 7:45 p.m.), a doc profile of local artist and actor Aron Tager. The T.O. Indie Festival runs to Sept. 13 — find schedule and ticket info at www.film-fest. ca.

TUFF: Meanwhile under the city streets — on the screens on TTC subway platforms, to be precise — the Toronto Urban Film Festival presents its new slate of silent one-minute shorts, the handiwork of filmmakers and animators from 33 countries. From Sept. 5 to 15, commuters can catch shorts in a wide variety of programs, the annual competition slate being bolstered with special spotlights on three filmmakers — including Toronto’s Wrik Mead — and a specially commissioned piece by local art collective Public Studio that plays both on the TTC screens and a giant billboard on Yonge north of Dundas Square. TUFF shorts can also be seen in a free installation at the Drake Hotel from Sept. 10-13 and online at www.torontourbanfilmfestival.com.

CaribbeanTales: Heading into its ninth year at locations throughout Toronto, the CaribbeanTales International Film Festival is a showcase and incubator for stories by filmmakers working in the Caribbean and throughout the diaspora. It gets a glitzy launch with a red-carpet event at the Royal on Sept. 3 at 6 p.m. — the entertainment includes the world premiere of The Glamour Boyz Again: The Mighty Sparrow and Lord Superior on the Hilton Rooftop, a documentary tribute to two icons of calypso music. (The Mighty Sparrow is also on hand for a Q&A.) CaribbeanTales’ schedule of industry events and screenings runs to Sept. 13 — recent films from Guadeloupe, Trinidad and Tobago, Guyana, St. Lucia, Barbados and Jamaica all get valuable screentime.

Cabbagetown Short Film and Video Festival: And for moviegoers who want to avoid the madness that envelops King Street West and stick to the east end, the Winchester Street Theatre (80 Winchester) is the place to see a diverse program of short films on Sept. 5 at 8 p.m. While TIFF’s other competitors are relatively new to the scene, the Cabbagetown Short Film and Video Festival has been going since 1992, which means it technically predates TIFF given that the big fish was known as the Festival of Festivals until 1994. So maybe we should consider Parliament Street the city’s true cinematic epicentre.

Lawrence & Holloman: A very darkly funny play by Morris Panych, Lawrence & Holloman is now a movie thanks to the efforts of the Edmonton-based team of writer-filmmaker Matt Kowalchuk and his co-writer Daniel Arnold, who stars in the film with Ben Cotton and Ginger Snaps’ Katharine Isabelle. An award-winner at the Edmonton and Vancouver film festivals last year, it begins a run at the Royal on August 29.