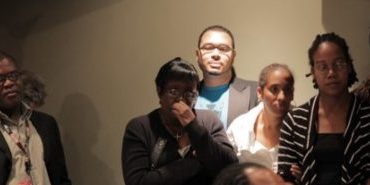 I came away from Caribbean Tales 2011 and TIFF 2011 with my eyes completely opened.  Every filmmaker or every wannabe filmmaker needs to go and be a part of a major film festival at least once in their lives.

Caribbean Tales offered that opportunity and it is part of the beauty of how the festival is set up to be so close to the Toronto International Film Festival.  In terms of location (Harbourfront Centre in downtown Toronto) and in terms of timing.  I hope that proximity is something that the participants of the incubators will take full advantage of since that is exactly why Frances-Anne Solomon has organized the festival in this manner.  She genuinely wants Caribbean filmmakers to come and yes, of course have their films showcased and screened at Caribbean Tales, but also to step out onto the wider stage and into the great wide world of the entertainment industry.  Once any filmmaker does that, there is no going back.

I’m almost embarrassed to say it, but I’ve been working in the entertainment industry for over 10 years now and TIFF 2011 was my first major international film festival.  I had entered a couple of festivals previously, but actually physically attending a festival, especially one on the scope of TIFF, was quite an eye opener.

Caribbean Tales is the festival that gives us Caribbean natives (I’m from Barbados) a voice in an international arena.  It is entirely up to participants exactly how much they take advantage of that.

Look at it from this perspective: for one solid week, participants are invited to share their marketing strategies and to work on perfecting their pitches and presentation of their projects on an individual basis.   The group structure helps to expose the flaws and the strengths since there are different point of view and no presentation is ever 100% perfect.  The filmmakers are almost literally groomed to prepare for interaction at TIFF and to fully utilize every opportunity that will be made available over the course of the festivals.  And for those with films screening at the Harbourfront Centre, they have options to invite any potential partners for a screening (and of course having a screener DVD never hurts).

Everything that is offered and is made available is to showcase the filmmakers, but more than anything it is to prepare them for the world stage so they can approach it with confidence and preparation… and with the knowledge that their fellow filmmakers are cheering them on.

Nobody else does this and it’s why I’m particularly glad for Caribbean Tales.  It exposes all of us fimmakers to the true power and potential of what the film festival can be.